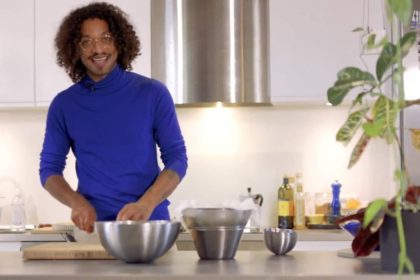 Zilber made major headlines and surprised many in October when he left his job as head of the fermentation lab at Noma for a food scientist position at Chr. Hansen, a global supplier of bioscience ingredients. Noma, a two-Michelin star restaurant in Copenhagen, Denmark, has been regularly ranked one of the best restaurants in the world. In 2018, Zilber co-authored a bestselling book on fermentation with Noma co-owner Rene Redzepi.

In an Instagram live interview last week with Al Jeezera’s Femi Oke, Zilber elaborated on why he traded an apron for a lab coat. The global food system, Zilber says, is unsustainable. Waste is prevalent, food is created with long footprints, agricultural production is shrinking, meat is heavily consumed and large corporations control the industry.

“What I’m trying to do in my work is to make vegetables as God damn tasty as they can possibly be by using microbes, using things that are already at our disposal, and convincing people that this might have to have a little bit of a longer inventory life while you let it ferment, while you build a stockpile, but this is the result, this is why you’ll be able to convince people why eating this way is healthy for them and the planet,” he says. “Flavor is king.”

Ingredients created by Denmark-based Chr. Hansen (the company has 40,000 microbial strains used as natural ingredients) feed 1-1.5 billion people a day. These include microbes in yogurt and yeast in beer.

“I work with them to try and make the food system more sustainable, to get more people eating vegetables,” Zilber says, adding that 30% of every calorie consumed by humans is fermented by bacteria, microbes or fungus. “No matter what we eat in the future, that’s still going to be the case. That slot of the human diet still needs some form of microbial transformation, whether it’s meat or dairy or oat milk or peas. I work to figure that out.”

It’s a different philosophy compared to the food technology many new companies are utilizing to create alternative proteins like Beyond Burger. He complimented the company for their high standards, but he says a Beyond Burger patty is not a replacement for a juicy, beef burger. People pay more for an inferior eating experience.

“At the end of that day, that will not cut it,” Zilber says. “Why does food have to be that processed to be purportedly that delicious? With some skilled tricks in the kitchen, with some ninja jiu jitsu behind the stove, you can make vegetables really, really delicious.”

A sustainable food system will look much like one from 300 years ago, Zilber hypothesizes. It will be localized, where people purchase food produced close by. Modern practices of shipping ingredients and processed food around the globe are harmful to the environment.

“A truly sustainable food system looks far more decentralized than [the current one] does right now. There are [only a] very few stakeholders that are responsible for really a lot of calories,” he continues.

Oke questioned how Zilber could change a broken food system controlled by large companies when he now works at one of the major companies.

“If you want to be an idealist, that’s great, you might end up being a martyr,” Zilber says. “Sometimes you have to work within those contradictory institutions to try to do as much good as possible.”

The restaurant industry plays a part in it too, Zilber says. Workers are stretched thin, overworked, underpaid “and then extremely vulnerable in a time of crisis.” The pandemic has exposed and highlighted these problematic parts of the restaurant business.

Zilber says there are still too many restaurants. It’s hard to find good cooks, and staff is often undertrained.

“I took a step into food production myself. Maybe more of these cooks, more of these people who are passionate about food, need to consider options beyond just the restaurant setting and see value in becoming a farmer, becoming a distributor, becoming someone who decides how those calories are made because restaurants aren’t the full picture of the food system,” he continues. “There are a lot of talented people within it who know food, who understand it, who understand the human experience of what it means to make good tasting food and satisfying food. There’s other places for them to work as well.”