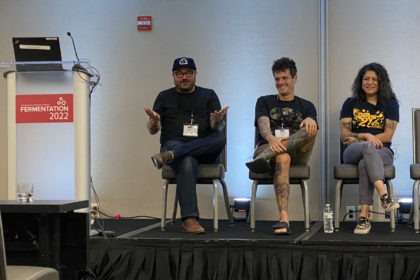 In the last decade, fermentation has taken center stage at fine dining restaurants. How do owners and chefs develop and maintain a fermentation program for their kitchen?

An all-star team of U.S. chef-owners at FERMENTATION 2022 shared their successes  and failures in developing fermentation-focused kitchens. Speakers included: Sean Brock of Audrey Restaurant in Nashville, Jeremy Kean of Brassica Kitchen in Boston and Misti Norris of Petra & the Beast in Dallas. Jori Jayne Emde, chef, educator and owner of Corner Office in Taos, New Mexico, moderated the discussion.

The chefs all focus on whole food utilization, aiming to eliminate food waste in flavor-packed dishes. Fermentation is key. Food scraps that would otherwise be thrown out – stems from produce, coffee grounds or animal bits – are fermented and reinvented in flavorful, unique dishes.

“By reusing the product in different manipulations over and over again, this type of program can really develop branding potential over time,” Emde says. “The process of bringing several lives to one product puts one’s fingerprint on the cuisine, so the restaurant expresses its own terroir.”

Core to developing a restaurant fermentation program is assigning someone to oversee the process. Who will track the start dates, monitor pH levels and control filtration?

Emde, who formerly ran Fish & Game in New York’s Hudson Valley, quickly learned at the restaurant “you can’t just have a multitude of chefs handling it…ferments are alive and require being nurtured and cared for.”

Brock agrees, noting some restaurants have their chef de cuisine or sous-chef head up fermentation efforts. “But the reality is they have so much to do already.”

“It’s critical to have someone dedicated to the program,” Brock says. “When you’re having to build such a renegade operation, the biggest challenges are keeping up with inventory and monitoring each ferment.”

Audrey hired a fermentation specialist in 2014, Elliot Silber. He has a chemistry degree and “understands fermentation at a completely different level,” Brock says.

“I still can’t believe we have someone in charge of fermentation,” he adds. “Now, we put fewer things on the plate with a bigger impact. I get to finally produce food I would consider minimalist.”

Brassica Kitchen takes a different approach to their fermentation program – a food map.

“We’ve been running fermentation forward cuisine for about 10 years and, in that 10 years, we’ve gone through a lot failure and chaos and really kind of developing things as we go, to changing the menu everyday to coming in long before service to staying long after to doing inventory and plug and play with them. We hit a wall,” Kean says. “We’ve found ourselves looking at over 100 misos and going ‘What the fuck do we do with this?’”

The kitchen’s food map is a shared document where the chefs outline how to utilize every byproduct. It’s been Brassica’s most effective menu-planning solution. “This food map has solved a lot of the problems and created a box of creativity we can really thrive in,” Kean says.

When Brock launched his first fermentation program at Charleston’s Husk restaurant in 2010, “ironically our biggest challenge was the health department,” Brock said. “They would make us throw food away.”

Health department officials – many who had no idea what fermentation was or its inherent safety – would immediately issue violations for any food sitting on a counter at room temperature, a normal process for fermenting foods or beverages. Husk maintained a makeshift lab on the roof of the restaurant hidden from officials, and staff had a code word for when the health department would come to the restaurant.

Norris recalled instances where inspectors would pour bleach on their fermented food products or throw their meat in the trash.

“It’s hard because we’ve taken the time to learn and be knowledgeable about how to keep these foods safe. And then someone comes in who is supposed to be keeping people safe but has no knowledge of food and we’re trying to make food healthier and keep it more dynamic and sustainable,” Norris says. “It’s frustrating when you put so much of yourself and your philogosphy into the food.”

Today – as fermentation is featured regularly in  food, health and science news – diners are eager to eat unique, fermented dishes. This hasn’t always been the case. Even today,diners need to trust a restaurant before they will buy dishes experimenting with fermentation. Norris notes, when Petra and the Beast first opened, fermentation was not a food trend in Texas. Residents had not grown up with a food culture of eating and preserving wild food.

“It definitely did not happen overnight,” she says. “It took a lot of educating and reassuring people that these things are delicious and they are a little uncommon, a little different. It’s something that took time and effort to understand what we were doing with full utilization and sustainability.”

Kean, too, said it took time at Brassica.

“We’d be using all these (fermented) products and I wouldn’t even mention it on the menus,” he said. “The trust was built over all these years and until we could really start speaking on it.”

Eliminating food waste was mentioned as fermentation’s gateway of acceptance for diners.

Brock says the goal at Audrey is to find 10 uses for every seasonal, region-specific ingredient. For example, last year they received candy roaster squash from a local farm and served it in different forms in dishes throughout the fall season. But they also fermented it and will be serving it again this year.

The kitchen at Audrey is full of glass-encased ferments, each organized by parts of the tongue.

Brassica has found success in utilizing food waste by creating delicious dishes that are “black holes for the extra stuff” Kean says. For example, they serve a fried rice dish using sticky rice from the day before with fermented vegetables. The dish is popular, low cost and “encourages little things that can be vehicles in a dish.”

“It’s been inspiring over the years to find a use for the byproducts, then the byproducts become so important that you have to then buy the byproduct,” he says. “It’s happened to us over and over again.”

Petra and the Beast focuses on whole animal utilization. By being sustainable and “hyper-seasonal,” Norris says, Petra is “creating food with the most depth, creating food that’s not just one note.”

“I ask myself and the team ‘Well, what should we do with it? Is there a better use for it? Is there a sour brine or can we make a salt out of it and use it on that same vegetable next season?’” Norris says. “If you really truly understand why a flavor profile is developing in a certain way, you look at everything else differently.”